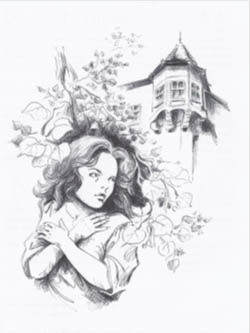 Once upon a time there lived fair and conscientious castellan Selecky at the Ľupča castle. Not only his vassals but also the enlightened lady of the Ľupča castle liked him for his kindness. That’s why she herself offered one of her chambermaids as a bride for this young and brave servant. Marienka was young, beautiful, pretty and nice. They often sat in the evenings in the castle garden, chatting like a pair of love-birds and making plans for the future. They lived happily together. Time passed by and the young couple expected a child. Young mother prepared baby clothes and she made each piece with great love. In joyful preparations the hard hour draw nearer. Marienka gave birth to a longed-for son. He was a beautiful, healthy and chubby boy. Great happiness was though suddenly spoiled by some clouds. Marienka was very weak after the childbirth. When she got out of the bed she was only the shadow of the former woman brimful of health and since then she was still in bad health. She was not even able to take care of her son, that’s why she called her cousin Veronka to come and help her. Veronka was as pretty as the rose flower. She was a real beauty and her life was all fun and laughter. When she moved to the Selecky family, who were so sad recently, the whole house came back to life. And the young chatelaine recovered her health and spirits in her company .
Days and weeks went by. Veronka enjoyed the life at the castle. She didn’t want even to imagine that some day she would have to leave that place. She would have stayed there forever even in the position of Marienka, together with Selecký. Veronka began to show her affection to the young and handsome castellan. The young chatelaine guessed what was happening and suffered a lot. She felt that she was weak, and cannot beat pretty and healthy Veronka. She spent sleepless nights and wept bitter tears. Her only consolation was her son who was unwillingly the reason of her illness as well as of the fact that she had lost her husband's love. Quite often she fervently wished her health with her husband's love had returned to her... 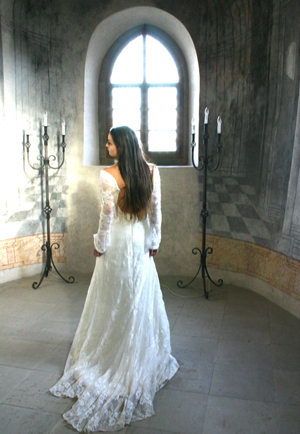 Castle owners came to the castle. The castle lady always enjoyed talking to the married couple, because the chatelaine was her faithful companion and her marriage with Selecký was a bit of her work. She was greatly surprised to find her beloved Mariška troubled and desolate-looking. In vain she asked her about the reason of her troubles, Mariška explained everything as her illness, which was killing her. But the castle lady had sharp eyes and she noticed that the relationship between the husband and the wife was not as warm and sincere as before. She didn’t want to let it alone and so she decided to find out the real reason of the trouble. Once in the evening when she was out walking in the castle garden, she heard whispers behind lilac bush. She crept up to the bush and saw Veronka in Selecky's arms. She crouched and listened what they were talking about.
Verona urged the castellan to murder his wife and marry her. Selecký didn’t even want to hear about such brutal act. His wife was only a shadow of former Mariška, but he felt pity for her and he still loved her a little bit. He persuaded Verona to wait patiently because Mariška would not last for long. When the castle lady heard that she became furious. She came back to the castle and immediately ordered the castle servant to bring her Verona. When Verona stepped into her chamber, she looked at her sternly and without lengthy speeches told her that she had heard her conversation with Selecký. For the ingratitude which she had showed to the chatelaine, the castle lady imprisoned her in the castle tower. Verona, however, didn’t last long in her prison. Remorse haunted her so much that after a short time she went completely crazy. One late evening she was in rage and jumped out of the window into the abyss and died. Her soul however didn’t find peace in the Hereafter. During the moon nights she walks in snow-white dress wailing around the castle and looks for her beloved..